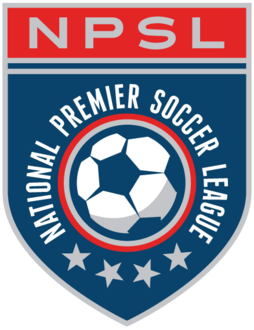 The National Premier Soccer League (NPSL) is an American soccer league commonly recognized as being a fourth-tier league, although it has been given no official designation by U.S. Soccer. The NPSL is a semi-professional league, comprising some teams that have paid players and some that are entirely amateur. Although the league is officially affiliated to the United States Adult Soccer Association (USASA) and qualifies for the U.S. Open Cup through USASA channels, it is generally considered to be the level of competition behind Major League Soccer (MLS) (Division I), the USL Championship (Division II), National Independent Soccer Association and USL League One (Division III), and equal with USL League Two (unofficial Division IV). It is the successor of the Men's Premier Soccer League, a regional league originally based in the Western United States, which has now expanded nationwide to encompass teams from 29 states. The league's motto is "A National League with a Regional Focus".